'Courage' gets Watts trip to Casper 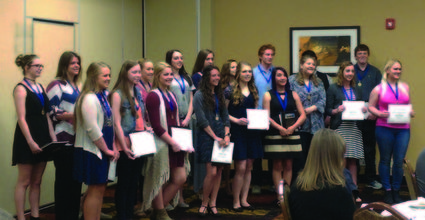 Some of the finalists stand at the Boys' and Girls' Club State banquet in Casper Sunday.

Encampment junior Charles Watts attended the Boys' and Girls' Club of Central Wyoming banquet held in Casper April 23 to learn how his story did in State competition. Watts won local and district contests with his tale, "Growing up with Courage."

The subject for the contest was 10 Codes of the West. Out of 9000 essays submitted, "Growing up with Courage" was one of the final 22. He received a medal, $300 and a book containing the final 22 essays. 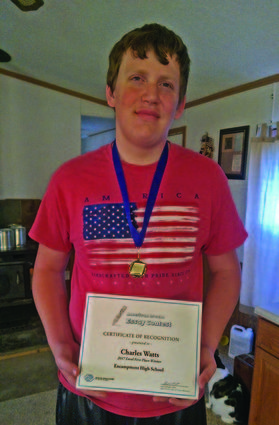 Encampment Junior Charles Watts poses with his first place medal and certificate from the local Boys' and Girls' Club of Central Wyoming. The local and regional win for his essay "Growing up with Courage" won him a trip to the state banquet in Casper.