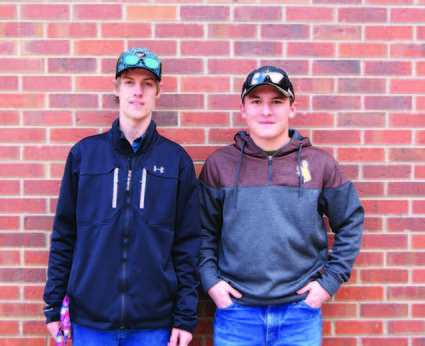 Patrick Ellis, left, and Landon Jones were recently awarded the state's top FFA honor for their contributions to the organization.

Patrick Ellis and Landon Jones, who have known each other since kindergarten, are two students of Hanna-Elk Mountain-Medicine Bow High School (HEM) awarded the highest degree the Wyoming state Future Farmers of America (FFA) can bestow upon a student; The State FFA Degree.

Both seniors, 17-year-old Jones and 18-year-old Ellis, are going different paths once they finish high school in May.

Jones currently lives on a ranch about 20 miles north of Hanna and will go into the Army once he graduates. His family has been involved with 4-H for a couple generations. Jones joined the FFA in 6th grade. Starting out, he showed pigs but over the years he focused on duties being reporter, sentinel and now is currently Secretary for Medicine Bow River FFA. While showing pigs he did achieve second place one year, but found working on mechanical projects more rewarding.

"I worked all the time on FFA shop projects making things like a saddle tree, decorations for the home or doing something that would help the ranch," he says.

Jones feels setting goals and accomplishing them will help him when he goes into the military. Working with the FFA gave him confidence. He admitted to being sometimes shy, but going to schools to introduce and represent FFA and explaining opportunities and scholarships available made him more comfortable interacting with people.

"If you are sort of a shy person, FFA makes you more outgoing," Jones said. "It also makes you responsible to following through on projects and that is going to help you later in life."

Ellis started FFA in the seventh grade and gives credit to his two older brothers for getting him interested the organization. His family had a cattle ranch outside Medicine Bow. Ellis also started showing pigs, but like Jones found himself wanting to work on mechanical projects that FFA offered.

"Until I started working on shop projects that FFA offered, I didn't realize I was very mechanically inclined," he explained.

Ellis won first place in class showing pigs two years ago, however it is the FFA shop projects that better used his abilities to make and fix things around the ranch he says. After he graduates, he will go to Sheridan College and specializing in welding.

Ellis was Treasurer last year and this year he is second Vice President.

Jones and Ellis will be helping with the FFA annual fundraiser and banquet. In the past years both have auctioned off their projects and services to help the group.

"Most people think FFA is about agriculture and animals but there is so much more," Ellis said.

In two weeks Jones and Ellis will go to State FAA where they will enter their projects to compete with other chapters.

Ellis said, "FFA opens up other skill sets other than just agriculture."

Jones agreed with Ellis' assessment saying, "FFA shows how you can be a leader and open your mind to what you can do."