The Patti Fiasco opens for Bon Jovi in Denver 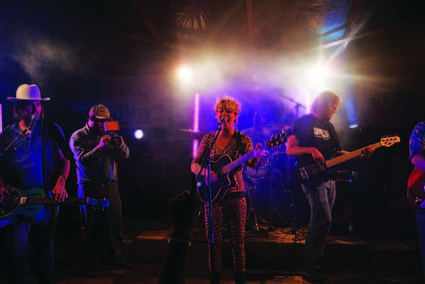 The Patti Fiasco plays WHATfest to a packed crowd in 2015.

One of Wyoming and Northern Colorado's most celebrated live bands, The Patti Fiasco, was announced as the winner of Bon Jovi's 2017 Opening Act Contest for their Denver appearance Thursday.

Thousands of bands from all over the nation competed for the opportunity. According to Alysia Kraft, the lead singer, "Bon Jovi is taking independent bands and ultimately elevating them up to this scale of sold-out stadium; kind of the thing that every band dreams of when they start out."

She added, "The stadium will have twenty thousand people watching us."

The Patti Fiasco will play at 9 p.m. but Alysia expects to start at 1 p.m. to get ready for set up. "When we go on, it will be twenty minutes of pure action."

The contest was sponsored by Live Nation and Bon Jovi. Bands were selected based on entertainment value, originality and creativity of their music video submissions.

Ten finalists demonstrating the sound, style and substance to open an arena show were selected by Live Nation with the winning act for each arena chosen by Bon Jovi's management.

Alysia said she was told, "We really liked your video and look forward to working with you."

"They said it was going to be crazy". The manager had just finished the Los Angeles show and they were going to take a few days off. It sounds exhausting what they are putting on."

When asked about practicing for the show, Alysia said, "We are going to have that set streamlined, we will be ready to own every minute of being up there."

The time allotted for Patti Fiasco is twenty minutes. After they play, Bon Jovi will come on.

"Yeah, when Bon Jovi comes out, he is going to be playing in my sweat," Kraft said.

The band might not be playing with Bon Jovi if not for Pam Kraft, Alysia's mother.

Pam was persistent in having her daughter enter the contest. "She definitely suggested many times." Alysia said smiling.

Alysia told her mother she would, but it took several reminders before Alysia sat down and got the application together.

"I am sure if my mother could have done it, she would have entered for me, but there was so much stuff that it had to be me." Alysia said.

"I guess I could be called a nagging mom," Pam a retired art teacher still living in Encampment, said with a laugh.

Alysia said she was in total disbelief when she found out she won. "It was crazy," Alysia said. "My mom was the reason we even entered."

Alysia was in Encampment when she learned she had triumphed over all the other bands. Alysia explained, "I got the e-mail and I walked over to my mother and showed her the e-mail indicating The Patti Fiasco won. Mom's eyes got big and she started to tear. Her face was swept of all composure."

Pam interjected, "What Alysia isn't saying, her eyes were big and they were starting to tear too."

Getting picked has already changed some things for the band Alysia observed, "The momentum for the band is already happening. Instant escalation of our social media. A lot of the major Colorado news outlets are doing stories and that is upping our exposure which is indispensable for a band."

Alysia further explained, "It is a big honor to be chosen and I think we were picked partly because of how we entertain audiences. This is a huge vote of confidence."

Three-time Northern Colorado Frontperson of the Year, Alysia Kraft has preformed on some of the region's biggest stages.

"What Alysia isn't making clear, is the frontperson of the year is chosen by other bands. So she is being honored by other bands for her performances," Pam pointed out.

Alysia asserted much of her confidence on stage started out in Encampment playing sports.

Alysia was thrilled the Lady Tigers won State. She said growing up in Encampment and being a part of some successful athletic teams helped with her confidence to perform before crowds. When the band began, Margaret Weber, former owner of The Bear Trap, had them play at her venue.

"Another place that supported us in Carbon County really early was the Cantina owned by Scott and Michelle McIlvaine. I have been singing for nine years and the early places that let us play deserve a shout out."

Alysia continued, "Music is a labor of love. I have watched people in bands sacrifice many comforts of life. I have seen so many from bands work hard and be resourceful. It takes dedication and often you don't do it for financial. I wouldn't change anything in my life about pursuing this."

Pam told of how Alysia first started singing at Coal Creek open mike in Laramie. "I think Alysia is a songwriter/singer. When she was starting out, she had trouble doing other's songs and she was more comfortable doing her own music. She is part poet. A lot of credit has to be given to Dee Tyler for recognizing what she brought to a band."

Tyler is a member of The Patti Fiasco.

Pam knew her daughter had something special when she saw her perform on stage. "I was like, 'Wow, did that come from Alysia? She rocks the stage.' I feel that her stage persona is an alter-ego to some degree."

Both mother and daughter say Alysia's biggest fan is her father Dan. According to Pam, when you could see clips of the other bands competing, Dan would always say, "The Patti Fiasco is way better."

Alysia said she has always had support of her family. Her sister, Cassie Orduno, who is a founder of Bella's Bistro in Saratoga with her husband Tommy, was mentioned as being encouraging, too. Not just immediate family. Pam said all her uncles and aunts were flying in for the show, too.

Alysia is also in the band Whipporwill which presents songs that are more melodic and harmonic. 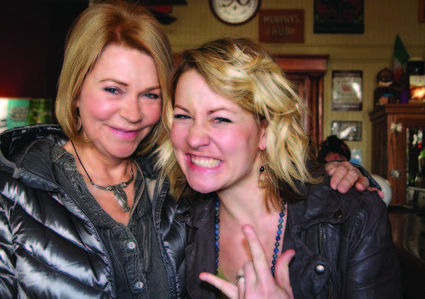 Whipporwill allows Alysia to show another side of her musical abilities. With this band, Alysia is playing at the Tree Fort Festival in Boise March 22-26. A couple hundred bands play at the festival. Alysia feels there is excellant momentum going for Whipporwill, too.

Opening for Bon Jovi with Patti Fiasco is a game changer, if only because Alysia is opening for a person she considers a paragon of rock. His faith in bands is legendary. "Just the experience is going to be amazing."

Alysia said starting out in Wyoming was excellent for the band. "In truth, small town playing drove it home."

Twenty thousand people in Denver are going to witness Alysia and her bandmates years of effort pay off on April 14th.

Tickets can be purchased at: http://www.altitudetickets.com/event/bon-jovi-6908/

For more information on The Patti Fiasco or to catch them closer to your home, visit: http://www.pattifiasco.net