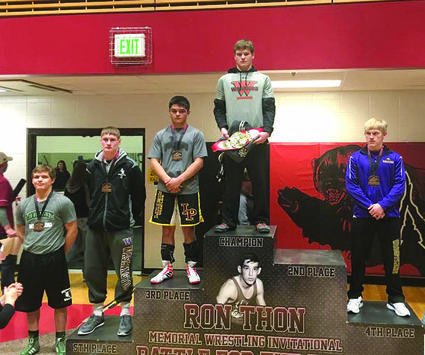 Still reeling from the lingering effects of a flu epidemic, Panthers wrestlers had an underwhelming weekend at the Riverton Ron Thon Invitational. Senior Thomas Ingraham secured a fourth place finish at the prestigious tournament, and sophomore C.J. Boswell notched his first high school win at the junior varsity level, but the rest of the team didn't fare as well.

"I have to take responsibility for the way that I felt we came in (Friday). I don't feel like we came in firing on all cylinders and that one's on me," coach Zach Schmidt said. "I got comments like, 'The boys still look sick, they look out of shape.' And that's tough to hear as a coach," he continued.

Schmidt said he had trouble deciding how hard to push his wrestlers in the days leading up to the competition, struggling to find a happy medium between keeping the athletes in shape and giving them time to recuperate from sickness.

Saratoga wrestled four at the varsity level at Ron Thon, but Ingraham was the only Panther grappler to survive to the second day of the competition. Overall, Ingraham won seven matches while posting two losses. "That's a tough weekend, eight or nine matches in a weekend," Schmidt noted.

Early on, Ingraham was pinned in the second round by a competitor from Moorcroft, surprising many attendees. That evening, "We went back to the drawing board. I talked to (Ingraham) after he had finished his three matches, and we prepped for that kid," Schmidt remembered.

The extra study paid off. On Saturday, Ingraham again ran up against the Moorcroft opponent, but this time he ended up on top, winning by decision, 5-2. "(Ingraham) made it all the way back," Schmidt said with pride.

The coach also took pride in Boswell's first high school victory, more so because he managed to notch it at Ron Thon, a rare feat. "So there's some very positive silver lining," Schmidt said.

This weekend, Saratoga will play host one last time before rolling up the home mats for the winter. Starting 3 p.m. Feb. 8 and 9 a.m. Feb. 9, the Panthers will put on the Carbon County Invite, featuring a slate of mostly 2A competition and "a surprise for the crowd and our team Saturday night," according to Schmidt.

"Everybody's taking notes on everybody, so it's the time of year when the things that have worked for you all year might not work as well," Schmidt warned.

For Ingraham, Friday and Saturday will be the last time he gets to wrestle in front of a home crowd. "It's going to be an emotional night for (Ingraham) and for his family and for us," Schmidt promised. "It'll be his night." Panther fans are invited to share it.