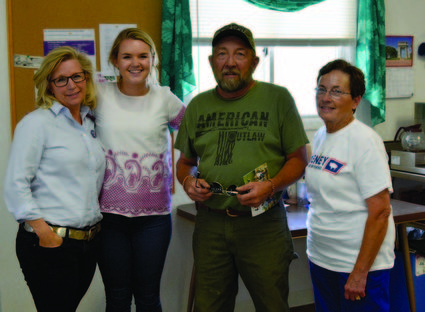 With Wyoming's at-large U.S. Congressional seat open for the first time in eight years, the race to replace outgoing congresswoman Cynthia Lummis on the Republican ticket is crowded and entering its final stretch. July 19, that race came to the Platte Valley when Liz Cheney made a campaign swing through the area, stopping at the Saratoga Senior Center and eating lunch in Encampment prior to the August 16 primaries.

About five residents, including National Rifle Association (NRA) election volunteer coordinator Rusty Rogers attended Cheney's 45-minute meet-and-greet in Saratoga. Cheney was joined on her trip by her teenage daughter Kate and campaign manager Bill Novotny. Following the event, Cheney made time for a brief interview with the Saratoga Sun in order to introduce herself to area voters.

As the daughter of Dick Cheney, former Vice President and U.S. Representative for Wyoming from 1979-89, Liz Cheney is considered a political heavyweight and a frontrunner in the nine-person primary. The last Wyoming Democrat elected to the U.S. House of Representatives left office in 1979, and the Cowboy State has tilted so reliably red in years past that the winner of the Republican primary will almost certainly be headed to Washington in November.

Cheney boasts a law degree from the University of Chicago and is married to fellow attorney Philip Perry, with whom she has five children. The two have made their home near Jackson, Wyo. since 2012, when the family relocated there from Virginia in the lead-up to Cheney's unsuccessful 2014 bid to unseat incumbent Senator Mike Enzi (R, Wyo.) in the Republican primary.

Unlike most of her opponents, Cheney has access to some of the nation's most influential conservative power brokers–and their checkbooks. As of the end of June, according to reports filed with the Federal Elections Commission, Cheney had outraised her closest financial competitor in the race, Timothy Stubson (R-Casper), by a factor of almost eight to one. Cheney finished June with over $640,000 in her warchest, having raised over $1.2 million since the beginning of the year.

Though she has never held elected office, Cheney has enjoyed moderate prominence on the national political stage. In the George W. Bush Administration, she was an Iran and Syria specialist for the State Department in the Bureau of Near Eastern Affairs. She said that role left her well-prepared for office because "that part of the world is going to continue to be a tremendous threat to us." Cheney also spent 18 months working as a Fox News commentator prior to her 2014 bid for Senator Enzi's seat.

During her interview, Cheney emphasized the importance of maintaining America's military edge at a time when, she says, "our enemies are growing in strength every day." Reflecting this muscular approach to foreign policy, Cheney co-founded now-defunct "Keep America Safe," in 2009, and "the Alliance for a Strong America" in 2014. Keep America Safe lobbied to prevent Guantanamo Bay detainees from being tried in American courts and pilloried lawyers involved in representing the accused. According to a press release from the organization, the Alliance for a Strong America "advocate(s) for a restoration of American strength and power." By Cheney's estimation, this work is critical in a time when "Our military has been absolutely gutted by this president."

Cheney also spoke at length on the important role she foresees for the fossil fuels industry in Wyoming moving forward. "Oil, gas and coal provide the kind of affordable, reliable energy our country needs to run," Cheney said. She said a nine-year permitting process for oil and gas projects was stifling investment and described these industries as "handcuffed" by federal regulations.

When asked whether she supported an increase in the state excise tax on wind power, Cheney responded "We've got an administration that's pushing this fantasy that we can run our nation on renewables. We can't." The candidate then pivoted back to a need she sees to roll-back regulations "so our fossil fuel companies can get access to these resources."

The only area in which Cheney said she could foresee working with Democrats was in reversing the Clean Power Act with the help of Democratic representatives from coal-producing states. When it comes to bipartisan coalitions, Cheney said the most important thing for a congresswoman to keep in mind is "To know first of all where she can't compromise."

State-level issues that Cheney commented on included a costly rehabilitation project for the Capitol building in Cheyenne. Among others, her opponent, Wyoming Representative Tim Stubson (R-Casper), was named in a lawsuit alleging that the project was improperly bid. "You've got to ask whether or not somebody who's been at the heart of approving that kind of thing deserves a promotion," she said. When contacted for comment, Stubson offered as a rejoinder, "It's easy to criticize efforts to improve and invest in this state when you've been missing in action for the last three decades."

Fearing that Wyoming would "be left holding the bag," at a later date, Cheney rejected the idea of accepting federal Medicaid expansion money to give low-income people access to health care. The candidate also called for further investigation and defunding of Planned Parenthood at the federal level, and said the Common Core Curriculum amounted to Wyoming students "being force-fed a curriculum that was developed in New York or Los Angeles."

Cheney said while she was keeping her focus on winning her primary, she had some ideas for what committees she would like to serve on if elected to the House. Those included natural resources, energy, and agriculture, as well as National Security, which she calls "a huge priority for us." Cheney said these committees have an outsize influence on Wyoming, and "Making sure that I'm able to serve on those committee that matter to us here is my top priority."

August 16, voters across Wyoming will get to decide whether Liz Cheney is ready to "cowgirl up" for the equality state.