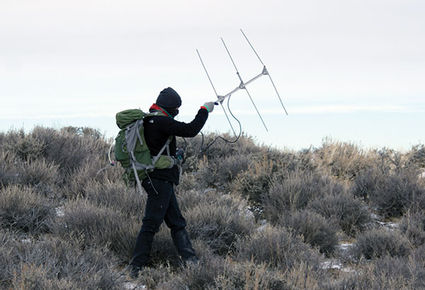 Adele Reinking locates a collar in the field with a radio telemetry device that clicks as she nears the site.

The pronghorn population in Wyoming has seen a decline, and University of Wyoming graduate student Adele Reinking has been collaring females from various herds hoping to learn why.

Part of her research takes place in the Carbon County area, and Reinking has been receiving help from the Rawlins Bureau of Land Management (BLM) field office to gather the dropped collars and data about the animals. The collared pronghorn are female, as is typical for studies about population, Reinking said.

According to Reinking, no one really knows how the pronghorn respond to energy development, whether they acclimate, suffer or benefit. Despite being an iconic and charismatic animal in Wyoming, pronghorn are not studied in the same way as other ungulates. As such, Reinking and, Melanie LaCava, a graduate student studying pronghorn genetics and helping with collar collection, represent some of the only people researching pronghorn right now. Reinking's study, which takes place in areas surrounding Rawlins, is currently the largest pronghorn study in the world, as well as one of the largest ever in Wyoming.

Reinking has been gathering data since the collars came off around mid-November. With help from the BLM, she expects to be done much sooner than expected, picking up about 15 collars per day. While she cannot draw any major conclusions at this stage in the study (some antelope collars are to come off next year) she has noticed that the furthest the pronghorn has traveled is around 70 miles. With GPS information recorded on the collar every two hours, Reinking will see thousands of locations from the past two years. With this information, she can determine how quickly the herds move, how far they go and what choices the animals make with regards to well patches and other environmental situations. 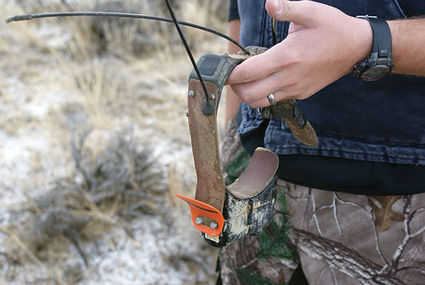 In order to locate the collars, the teams use radio telemetry. The radio will begin to click when the collar is near, either dropped or still on an animal. About 30 percent of the animals studied have suffered mortalities, which Reinking said is typical. When a collar is found, Reinking notes the location, time found, collar condition, area and topography as well as any other notes. With mortalities, Reinking will use whatever remains are in the area to determine the health of the individual.

Though the collar pickup is going faster than she expected, Reinking has had more collars than usual that did not discharge when they were scheduled to. As such, in order to gather all the data, she will have to plan a recapture process.

Since the project's start in 2013, Reinking has collared 186 pronghorn, and 125 collars remain. She estimates that the project will be complete in about a year.