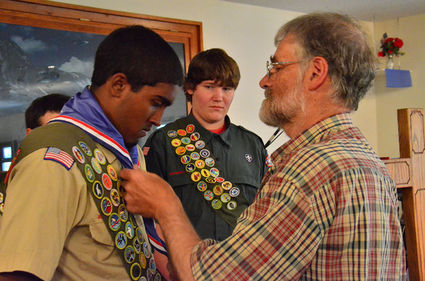 Emmanuel Pattishall-Baker watches as his father, David Baker, pulls the Eagle Scout scarf through the slide as Boy Scout Zane Michelson looks on.

Another proud Eagle Scout has made his presence known among the Platte Valley community.

Incoming Saratoga High School senior Emmanuel Pattishall-Baker received his Eagle Scout Award at a Court of Honor given Sunday at the Platte Valley Christian Center. He was also honored outside for completion of his Eagle project, where he renewed and restored the Christian center’s old wood welcome sign.

The Eagle project is a service project each scout must complete before receiving the highest rank in the Boy Scouts of America. Pattishall-Baker said the entire sign restoration project took 160 total hours to complete, when also including the work of others who helped and a pre-labor planning process.

“We used the same sign that was there before, but I took all the paint off, sanded it, put on primer, repainted it and changed some of the colors with the help of other scouts and parents,” he said. “It was great to see the final results after everything was done.”

Emmanuel’s mother Cindy Pattishall-Baker said part of the process included writing up a project summary, including costs, materials and projected number of hours on the sign’s restoration, before the actual physical work could begin. She also noted that Emmanuel had been active in scouts for several years before achieving his Eagle.

“Emmanuel has been a boy scout since he was 7, and earned 52 merit badges,” she said. “It’s required to have at least 21 merit badges for Eagle, and 11 specific ones are required by the council of Eagle Scouts.”

Before one can reach the Eagle rank, Cindy said scouts must go through the ranks of Tenderfoot, Second Class, First Class, Star and Life. Each rank is obtained by requirements such as the number of merit badges earned, types of service projects done, or troop callings and responsibilities held.

Emmanuel said has he enjoyed several aspects of life as a Boy Scout throughout the years.

“I have had fun at scout camp, and I always enjoyed the activities, camping and learning new things,” he said. “My favorite merit badge to get was probably the scuba diving one.”

Outside of scouting, Pattishall-Baker has also worked summer jobs at Doggett’s Greenhouse and the Bear Trap Café, and took an active interest in sports such as track, golf and basketball, in which he was Rookie of the Year as a sophomore. He said he wants to continue with basketball in his professional career.

“I want to become a basketball coach or a PE teacher,” Pattishall-Baker said. “I want to go to Northwest College in Powell and major in physical education.”

Cindy also mentioned that her other son, Jonathan Pattishall-Baker, also received his Eagle for constructing the Veterans Memorial at Grand View Park in Encampment. She said she was proud of both of her sons for what they had accomplished.

“The Boy Scout program was established by Baden Powell in 1911, and over the past 100 years more than 2 million boy scouts have gotten their Eagle, which is only 1 percent of scouts,” Cindy said. “Having your Eagle really puts you in the area of the elite in Boy Scouts.”

“I constructed the sound booth in the chapel with two or three people, and it took about 230 hours to complete,” he said. “We worked on it from about November to February.”

Other fellow Eagle Scouts in Saratoga include Robert Shipp, who worked on the memorial at St. Barnabus Episcopal Church for his project, and Chauncey Neville, who painted artwork on the west wall of the Platte Valley Community Center gymnasium.