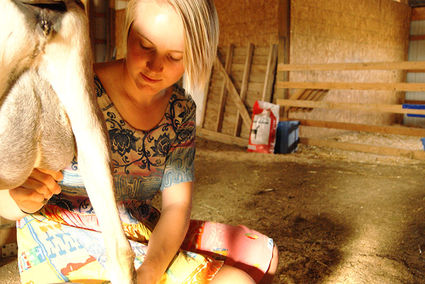 Caitrin Hall milks a goat in Jenn Maskell's barn July 11. Hall, along with her partner Lake Buckley, are biking across America to learn and experience agriculture.

Two California bikers traveled half way across the United States to learn more about farming and agriculture.

But Saratoga was not their first destination, nor will it be their last. The two bikers are on a mission to learn more about themselves and the United States farming industry.

“I believe that large-scale agriculture, the way that it is practiced today, is detrimental to the planet, detrimental to small-scale cultures and is ultimately impossible for the planet and for us to sustain,” said Caitrin Hall, one of the bikers in the two-woman team.

Hall and her partner Lake Buckley are biking across the United States in the Shifting Gears Project, a project that tasks the women with traveling 3,000 miles an visiting 30 farms within 90 days.

The duo, old friends from high school, reconnected after graduating from college to pursue the project. Hall and Buckley have already biked from Poughkeepsie, N.Y., through New Jersey, Pennsylvania, Ohio, Indiana, Illinois, Iowa, Nebraska and Wyoming. They still have to bike through Idaho and Oregon before reaching their final destination in San Francisco.

Hall and Buckley arrived in Saratoga Friday, receiving one of the warmest welcomes they have had on the trip.

“There is just this warmness which is such a good feeling when you are on the road,” Buckley said. “You cannot dream of something better when you have no idea what to expect.”

Hall and Buckley visited Saratoga to fulfill the goal of their project — visit female agriculturalists. In Saratoga, they visited Jenn Maskell, a long-time Wyomingite who lives on the outskirts of town with her family.

Maskell usually maintains a garden on her property, but this year her family is focusing more on raising goats for fresh milk, cheese and lamb.

Hall and Buckley spent their time milking goats and learning more of how Maskell maintains a vegetable farm in Wyoming.

“A lot of people say you can;t grow here, but you actually can,” Maskell said.

Maskell explained to Hall and Buckley some tricks she used to grow in Wyoming, a place with poor soil, scarce water and high winds.

“This is an especially difficult area to be growing things given the wind and the different soil types and water scarcity,” Lake said.

After a tour of Maskell's vegetable farm and barn, the family teated the bikers and other visitors to a dinner.

Hall and Buckley left Saratoga July 12 and will leave Wyoming to enter Idaho July 23 to visit yet another farming culture.

However, the bikers said they will never forget their trip to Wyoming.

“I love Wyoming,” Buckley said. “Hopefully we will receive a warm welcome at home as we have here.”